I was talking to Sequin World from Twitter before a Lucid Dream gig. So I said “yeah, ‘No Future Part II’ by Hey Bulldog is probably what New Order were intending on Movement”.

“Steady on” said Sequin World, “I know you’re biased,  but come on”.

“I am biased”, I admitted, “but I love New Order too, and I genuinely think that the songs’ mix of motorik beat and stately glacial guitar solo’s are what New Order were probably aiming for when they made Movement. That’s not to say Hey Bulldog are better than New Order, but Hey Bulldog are incorporating sounds into their traditional rammalamma and nailed it first time, it’s very exciting that the band has taken their approach to mind-freeing guitar solo’s and mastery of technique and gone in a fresh, new direction. It also shows off that as a group of musicians they’re the best around. Moreover, production is tip top, Rob’s vocals have never sounded better. Anyways, I’m going to get a good spot for The Lucid Dream…”

‘No Future Part II’ is a masterpiece and available to buy here.

You can follow Sequin World on twitter here and for that matter, colourhorizon and Hey Bulldog too. 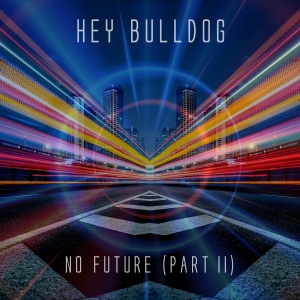