Let’s cut to the quick, here are 9 songs that colourhorizon would like to draw you attention to. Songs to love, songs to embrace, songs to enjoy for years to come.

With the exception of the couple of late entries, the songs are here based on how many times they have been played. These songs have been hammered and that is the ultimate acid test of any song.

Let’s get started in no particular order, but first name on the team sheet is always…

‘Unchained Dub’ reigns at the centre of the Lucid Dream’s second, eponymous album like a black hole, so dense and heavy it will suck the energy from the other albums in your music collection (bad luck for Lumerians). The Carlisle shoegaze band used this album to expand into motorik and dub, to startling effect. A raging shit storm is conjured up by Mark’s wizard weapon: the dub siren. Whirring, wailing, oscillating and spewing bad karma; it throws up energy, throws down for a fight and kicks out the mother fuckin’ jams. On top of which you have the baddest and most coolest of all instruments: the melodica. Dub siren and melodica? That’s some righteous shit.

A combination to die for as the Liverpool space-rock overlords teamed up with the legendary CAN frontman for a monstrous album, Start From Zero. ‘Zero Coda’ bought the record to an end with sharp edges and frisky beats all the way. Mugstar’s strength is bringing giddy abandon to their music and this encapsulates that perfectly, the music here is as joyous as eating jelly on a bouncy castle. This moulds Damo’s words into an effervescent, fevered day-dream. Wonderfully, his delivery reaches ‘Halleluhwah’ levels of transcendence. By the way, ‘Zero Coda’ goes on for 22 minutes, so yes, the spirit of CAN is alive and well… Travelling deeper and deeper into this epic, the music flows and punches sharper and harder with Damo becoming increasingly possessed and hypnotic. An emblem of enraptured; his shamanic delivery elevates the music further. Together they build a psych feedback loop.

The Manchester legends returned this year to prove that class really is permanent. ‘Tutti Frutti’ may have a cringeworthy name but is a huge, acid-tinged tribute to Technique, with similar vocal samples as ‘Fine Time’. It’s sweat soaked and filthy as fuck. What’s clear is that Barney has clearly not lost the uncanny knack of writing an earworm-ing chorus. Here he’s verbally sparring with La Roux in a frothy back-and-forth that just keeps on giving until we’re left with the gravelly Italian robo-soul utterance of the title. It’s up there with the best…

Zeitgeist agitators Sleaford Mods are let’s face it, pretty big at the moment, surrounded by buzz like grease covers the contents of a KFC Mighty Bucket for One. Vocalist Jason Williamson is simply the most magnetic spleen-ventor this country has spat out in decades. He may not want the comparison, but he is Rotten and Strummer for a new generation and a new set of problems. Every quip, every swear word, every barb at inane culture is a slap in the face of every right-on bearded hipster gobshite and every Daily Mail reading, tennis watching, dead-from-the-neck-up vermin. Like it or not these songs are born from the same lineage as ‘Anarchy in the UK’, ‘Beasley Street’ and ‘Bingo-Master’s Breakout’.

Lead single ‘Tarantula Deadly Cargo’ is damn near melodic and even closer to playfully whimsical. It’s as accessible as they will probably ever get in their own rough diamond way, with repeated phrases concerning “European poo’s” taking the place of 3 minutes of bile.

Click to watch the video, you can dance to it, sing along to it and it features ice cream. 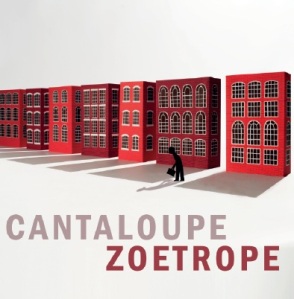 ‘Indigo’ is where the party starts on Cantaloupe’s debut album Zoetrope. A crisp, resolute drum beats snaps the listener into action and all of a sudden it’s time to dance. ‘Indigo’ has a Daft Punk quality but also has the feel of an 80s electronic rap crossover (not that I want to suggest that Cantaloupe are the Rock Steady Crew). The verses are brilliant pieces of poetry, take this passage of imagery combining the urban, the dystopian, corruption , destruction, reality, dissolution…

Then comes one of the pivotal moments of the album, a killer, hands in the air chorus and enough energy to make concrete fizz:

Now, this chorus doesn’t look much written down but Tom A.D.’s vocals turn the this simple mantra into a masterpiece of sing along songwriting, the essence of brilliant pop music. The interesting thing is the line ‘How am I ever going to let her go?’ doesn’t quite fit, meaning that Tom has to slightly rush the line. However this gives the chorus a jolting, punkish air of discord. Oh and the bass is funky as hell.

Klusters are a Hungarian electronic duo, whose debut album, Olbers’ Paradox is, to quote their snazzy website, “a concept album based on questions about the connection between the self and its subconsciousness, dreams, love and destiny”. 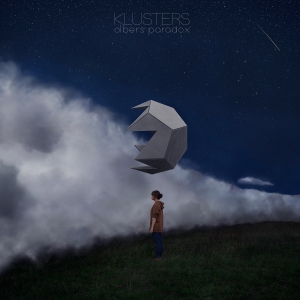 Veering from the brooding to the anthemic, Klusters album Olbers’ Paradox has much to appeal to fans of all things electro. ‘Shall We Remember’ comes at the end of the laid back middle section of the album with floating, mourning guitars until a slow, intense rhythm kicks in. After enjoying a warm, soup-like atmosphere, we really hit top gear at around 6 minutes. It’s worth the wait, with a killer chorus, stark piano and urgent electronics combining to make a thumping dance smash. This final passage at just 3 minutes though, feels way too short, Klusters could have kept this party going for a lot longer. An exquisite moment of release…

Radar Men From The Moon – Deconstruction’

What is immediately striking about ‘Deconstruction’ is just how crisp, immediate and energetic the drums are. This is bold new territory for the Radar Men, moving away from the huge slabs of riffs of their first album and the abstract cut out shapes of their last album, Strange Wave Galore. With a bold side-stepping of the necessity to paint huge swathes of stately noise, Radar Men are forcing through with an energising space-dance. The whole thing flexes and glides like a stingray. Throbs of sound flare while quicksilver guitar shoots lightning bolts. ‘Deconstruction’ shines the light on a new direction for the band, one that will get people dancing.

Teeth Of The Sea – ‘Field Punishment’

Teeth Of The Sea are a multi limbed monster that spans the great divide of post-rock, noise-rock, ambient, prog, space rock and fuck-knows. Hell, when I caught their blistering set at the 2013 Liverpool Psych fest they turned the place into a fuckin’ rave.

Their 2013 album Master was widely regarded as a superlative, flawless record by, well everyone really. Even my boss likes it and he listens to Clapton. Late 2015 the much awaited follow-up, Highly Deadly Black Tarantula arrived.

‘Field Punishment’ sheds narrow electronica; Blade Runner and Fad Gadget. Surgical tools glisten. The bass gets funky, we’re not a million from Chemical Brothers, believe it or not. Keys drop in and out; digital heaven. Strap in folks, it’s time to dance as the ingredients are welded together to make a brutalist rave epic. A hypnotic, digital, subdural amalgamation of everything you need to have a fine time. Proof of this songs’ glory? At 6 minutes, this is way too short. They could crank this out for 30 minutes and keep everyone happy…

The Tapestry – ‘We Talk’

Welcome to the sound of summer 2016. Say hello to The Tapestry, a stylish girl-boy disco wrecking combo. They reign with whacking great terrace singalongs; perfect for both afternoon radio play and late night partying. This is a pop band for an era which has forgotten what pop music could be.

Their new single is ‘We Talk’ which takes their trademark herky-jerky angular grooves and welds it to another prime selection from their big box of chorus’. Once again The Tapestry mostly recall The Fire Engines (if that fine Scottish band had got their shit together). The drums are skin-tight, the bass gets under your skin and the guitar a dazzling, fizzing power line. A dizzying blockbuster.

It’s married with a perfect video that showcases both band and song. Manchester’s next biggest band? See for yourself.

So, there we have at it. 9 songs which colourhorizon hopes will brighten up your days.